My son doesn’t have the best track record when it comes to sports. Between his ADHD, strong emotions, and a general lack of stamina, he’s never been much of a team player — much less a star athlete. And while he has an abundance of initial excitement, the inevitable obstacles often erode his confidence. What starts out fun turns into discouragement, frustration, and ultimately, abandoning the sport altogether.

So, when after just a couple of weeks of middle school, Jon asked to sign up for soccer, I was hesitant and more than a little skeptical. I explained that soccer had a LOT of running, and wouldn’t he rather get acclimated to his new school and wait for baseball in the spring? But once again I gave into his excitement — excitement for new friends and teammates, as well as an entirely new sport.

THE GOAL IS IN SIGHT

When I picked Jon up after his first practice, I could tell he was exhausted. He quickly chugged a bottle of water and told me his chest hurt. The coach had asked them to run laps, and he’d only made it halfway through before resorting to walking. I tentatively asked my out of breath boy if he wanted to stick with it. He surprisingly proclaimed he loved it and couldn’t wait for the next practice.

The next week positions were assigned, and as he was the only one to volunteer, my son became the team’s sole goalkeeper. Probably the best fit for a kid that didn’t like to run.

But at the start of the first game, I saw a floppy-haired player hauling ass across the field to the net. It was my son! This kid was full of surprises.

About halfway into the season, I’d gone to the restroom during halftime and came back to find a different kid tending goal. I scoured the sidelines, eventually spotting my son playing defender. Even from afar, I could tell he wasn’t happy.

As the game ended, Jon quickly packed up his things and started walking across the field to me. His coach called after him but was ignored. I met him halfway, admonishing him to turn around and answer his coach. Yet as I saw tears start to well up, I realized it was a lost cause and gave a friendly wave/shrug to the coach.

It turns out the coach had pulled my son at halftime, wanting to give another player the chance to tend goal. I can’t know for sure the coach’s motivation but being behind 4-0 may have had something to do with it.

Jon felt personally insulted and hurt. It was his position, and made him feel special and important. I understood his frustration, but explained the coach is in charge of the entire team; that he had to give other players opportunities to make the team better overall. I also told him he can’t walk away from his coach like that. He was deep in sulk mode, so I had no way of knowing if he heard or understood what I was trying to say. That evening as I relayed the events to Papa, we both wondered if this might be the end of the season for us.

The next day I asked how practice went, and if he was still mad at the coach. Not only was he not mad, but he informed me that he’d apologized to the coach for walking away. This self-initiated apology was a major milestone, and yet another big surprise of the season.

A few days after the final game, I got an email that my son would be receiving an award. I RSVPed I’d be attending, yet wondered why it was a secret; I assumed all the kids would be getting participation trophies.

As I made my way to the gym, I was surprised at how few parents were there. The middle schoolers were herded into the gym a few minutes later, stamping their feet as they climbed the risers. My son saw me, gasped a bit, and waved.

The presentation started, and I noticed the short stack of awards behind the coaches. As the plaques were handed out, I realized that only a few kids were being recognized — not entire teams. As they got to the 5th and 6th grade soccer awards, I quickly pulled out my phone to start recording.

After handing out two MVP awards and a coaches award, the pleasantest surprise of all:

“For the last award, if you saw this player, you’d never know it was the first year this student was playing. At our first practice, he volunteered to play one of the toughest and most important positions on the field. His dedication to being the best goalie he could be was seen in each game, and he got better every week. I’m looking forward to seeing him take his skills to the next level. The award for Most Improved Player goes to Jon!” 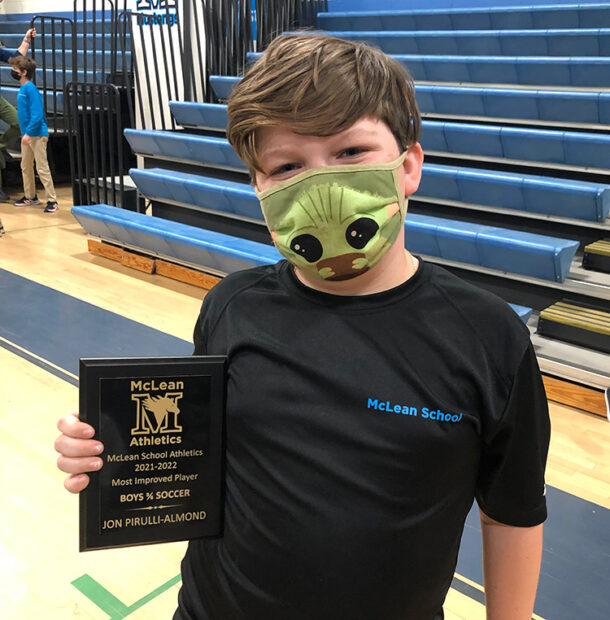 My cheers were drowned out by those of the mob of middle schoolers behind me. Jon seemed excited and proud and more than a little shocked. As I walked up to hug him afterwards, I heard him tell a friend that he’d also been nervous.

“Everyone knew it was going to be you, Jon!” she encouraged.

THE VALUE OF MOST IMPROVED

Later that afternoon I thought about how great that must have felt — being the new kid at school, trying a sport for the first time; being awarded for his efforts; cheered by his classmates. I thought about the doubts I’d had about my son’s resilience, and all the ways he’d surprised me.

And I thought about the value of recognizing improvement. Not just in my kid, but in myself.

As I mentioned at the start, I often fall into the trap of comparing myself and my parenting skills. I compare myself to my parents, my partner, other parents from school, other parenting bloggers.

But after this experience, I realized my goal shouldn’t be to win Parent MVP. Perfect parenting is impossible; a misnomer; an oxymoron, even.

In her book, Your Turn: How to be an Adult, author Julie Lythcott-Haims addresses perfection: “The life of your dreams results not from being perfect but from your efforts to learn and grow. Lean into that, and your life will become deeply satisfying, which is a much more delicious feeling than perfect.”

Most Improved Parent is the recognition I want.

What are the attributes of Most Improved? Determination, resilience, the ability to come back from failure and disappointment, playing the long game, seeing the bigger picture. These are all things I want — and hope — for my son. Not just in sports, but in all of life. And these are things I want for me. Things I have exhibited from time to time, and things I need to give myself credit for.

PERFECT PARENTING: NOT A THING

Comparing myself to other parents is an exercise in futility because we’re all apples and oranges — completely different from each other. I can only compare myself to how I was yesterday, how I was last year. And even that isn’t a fair comparison sometimes. While I may have gotten good at one thing, my kid’s now a year older and he may not need that thing anymore. Children tend to keep us guessing like that.

The great thing about a Most Improved Parent award is that it isn’t a one-time thing. Because I’m always screwing up, failing, getting back up and trying again. I guarantee you I will never stop making mistakes — so I will never stop improving.

My encouragement to you: You may not be a perfect parent, but you’re better than you were the last time you screwed up. Go give your kid a hug and yourself a pat on the back. Consider this your official Most Improved Parent award. Wear it with pride. I know I will.

For some great insights on raising adults (and learning to be one yourself), check out the works of author Julie Lythcott-Haims, How to Raise an Adult and Your Turn: How to Be an Adult.

Responsibility.org is all about responsible alcohol choices. Please check out their site for valuable info for parents and non-parents alike. An important fact: parents are the leading influence on a child’s decision to drink (or not drink). When conversations about alcohol between parents and kids increase, underage drinking decreases.

As a brand ambassador for Responsibility.org, I am being compensated to write this post. However, all opinions are my own.