As part of the adoption process, we had to create a family album — this is what Jon’s birthparents used to get to know us and eventually chose us to adopt him. It was probably the most stressful thing I ever designed… but also the most rewarding. 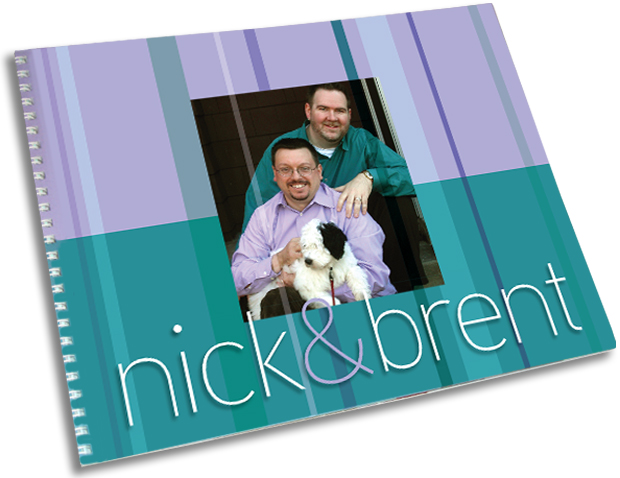 Navigating our relationship with Jon’s birthparents caused me lots of anxiety early on. Yet this sweet card for our first Father’s Day is a precious reminder of the gift they gave us in the form of our son.

The note inside reads: “Nick & Brent – We’re so glad that we chose you to adopt Jon. You’re the best parents we could have ever imagined for him. I’m glad that we were able to complete your family as well as add to our own. Have a great first Father’s Day with Jon!” 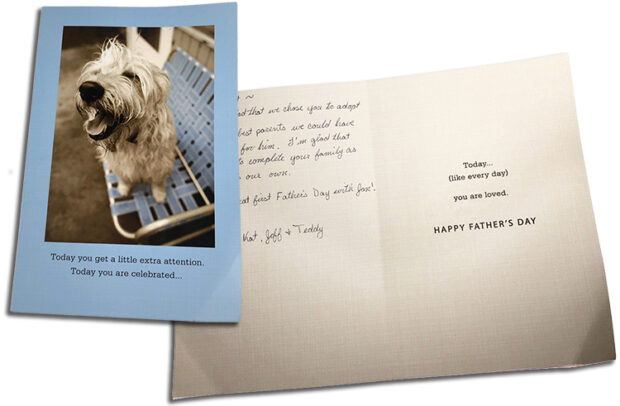 The most ridiculously adorable hat ever. It’s a reminder of the stress, chaos, silliness, and joy of our son’s first birthday… and of fatherhood in general. If you can’t laugh at the insanity of parenting sometimes, you’re screwed! 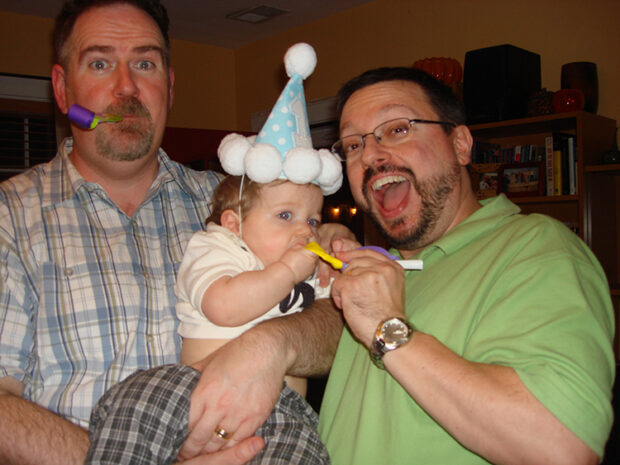 What parent doesn’t treasure their first Father’s or Mother’s Day craft? We loved these doubly so, as Jon’s preschool let him to make a trophy for both his Daddy and his Papa. They hold a place of honor on our respective desks all these years later. 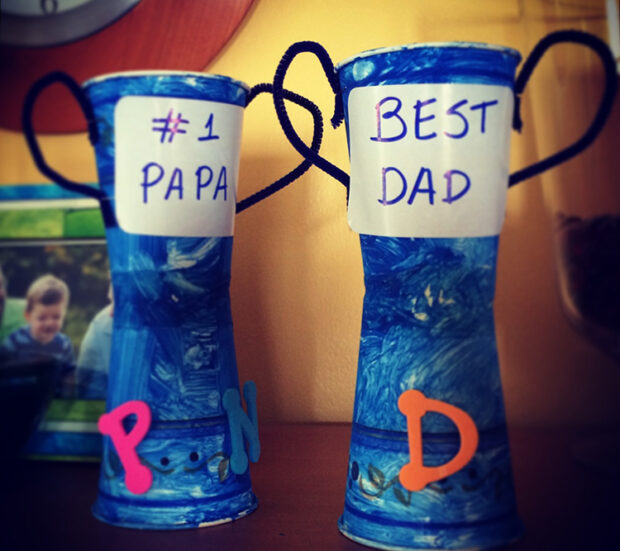 It was hard to narrow down a favorite book, so I chose two that had the strongest influence on our fledgling learner. After reading Quack! Quack! — a board book of baby animal sounds — on repeat for weeks and weeks, it should have come as no surprise that Jon’s first word was “quack.” We couldn’t have chosen a more appropriately quirky first word for our son if we’d tried. And Star Wars ABC was a bedtime staple for many months, as it taught both the foundations of the English language and of our favorite galaxy far, far away. You don’t know adorable until you hear a toddler say “Obi-Kenobi” and “Bobo Fett.” 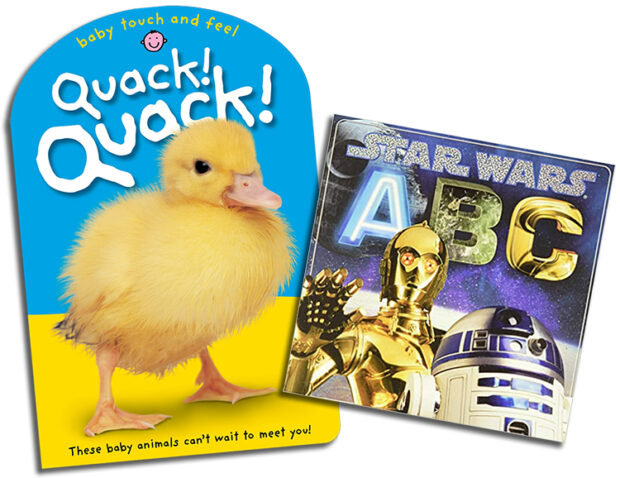 As an artist, it was next to impossible to pick just one of Jon’s creations for this list. Sure, there were plenty of family portraits that warm my heart, but this (unintentionally) deconstructed Thanksgiving turkey is a true work of art. Only a child could create with such abandon, disregarding rules and reason — making their designer daddy so proud and thankful. 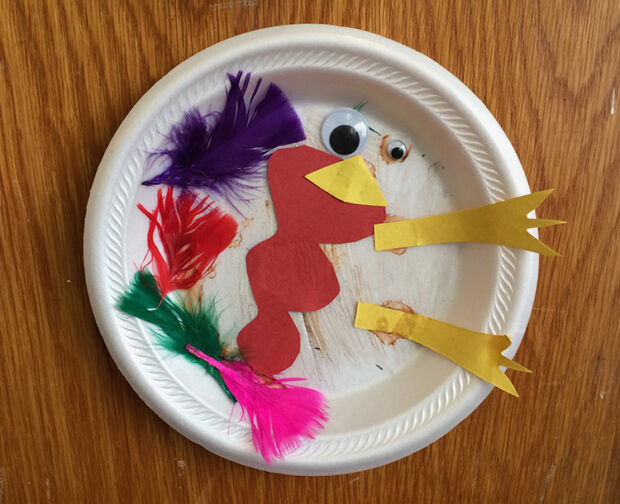 When Jon was still knee-high to a tumbleweed, I wrote, performed, and recorded a country song called “My Two Daddies (Can Beat Up Your One).” You can read all about the inspiration/creative process here, but my favorite part of the whole experience is my little cowpoke singing along to the ditty his dear old dad wrote about him. For pride that year, I had a shirt with the song title made for Jon, and shirts that said, “Daddy One” and “Daddy Two” for me and Papa. 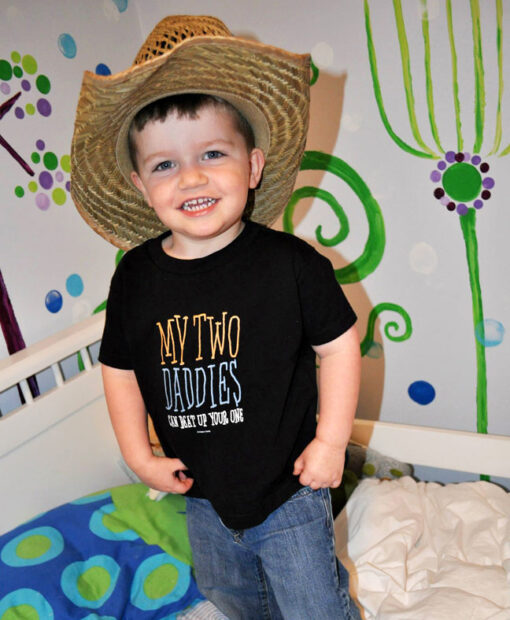 Not only does this commemorative egg remind me of attending the 2013 White House Easter Egg Roll, but also why I love living in our nation’s capital and all of the wonderful experiences it affords us. 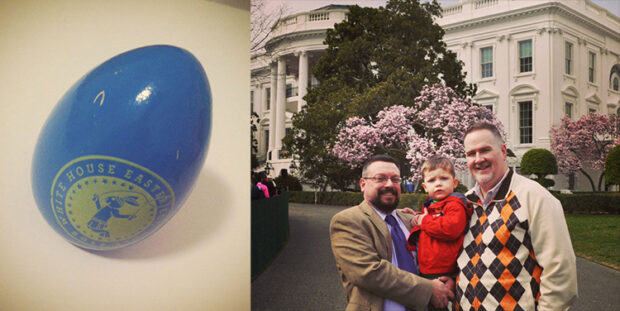 If you’ve followed me or this blog for any amount of time, you know I have a thing for doodling superhero notes for my son’s lunch. But did you know he made one for my lunch once? Jon was 7, and at the peak of his Power Rangers mania. My lunch notes had gone viral and garnered me (and him) quite a lot of media attention — which he loved. Yet all the exposure and “fame” pales in comparison to this extra super lunch note featuring his favorite Ranger and a simple yet encouraging message for Dad. 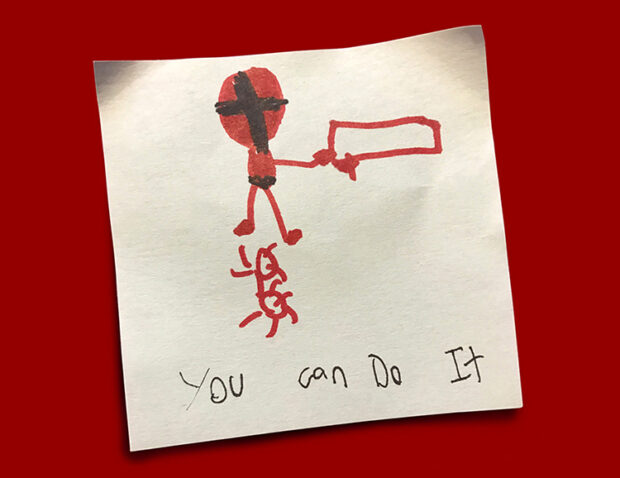 On the morning of Jon’s third birthday, I was excited to tell him that due to the election the night before, his Daddy and Papa could now get legally married in our state of Maryland. I told him that we wanted him to be a part of the ceremony by being the ring bearer. Not quite understanding, he replied, “So I get to ring the bell?”

Nick and I had already exchanged rings in a commitment ceremony several years before, so Jon’s confusion sparked an idea. After our service was finished and we were declared “Husbands, and companions for life,” I called Jon up to ring a big silver bell, which was then echoed by all our guests and the smaller bells they’d been given beforehand. It was a magical moment that I never tire of retelling, and the bells are a sweet reminder for our son that he was lucky enough to be a part of his parents’ wedding. Not many kids can say that! 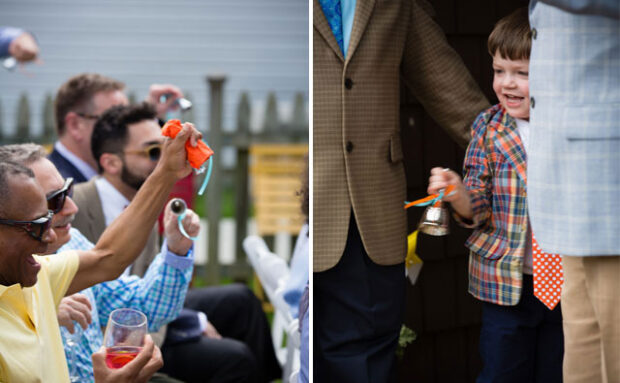 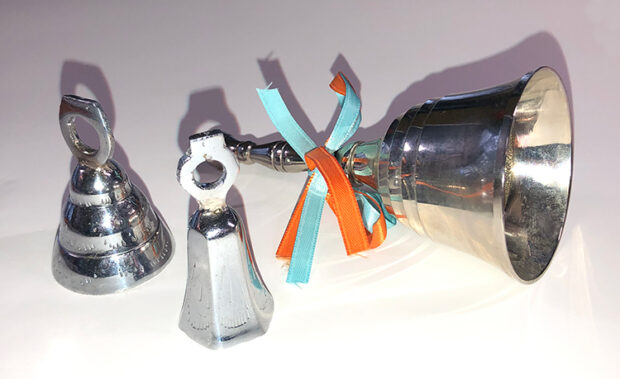 WHAT ARE YOUR FAVORITE PARENTING KEEPSAKES?

What items from your parenting experience have you found worth saving? Or if you’re not a parent, what have you kept from your own childhood?

It’s impossible to treasure every moment as a parent, so hold on to those physical reminders, in whatever form they take. On difficult days, pull out your keepsakes and remind yourself what a joy it can be… and how far your kids (and you) have come!

SOME TEETH ARE WORTH SAVING!

I’ve been doing this blogging thing long enough that I can be choosey about what paid gigs I take on. When the American Association of Endodontists approached me, my first thought was “What the hell is an endodontist?”

Luckily, the organization’s #WorthSaving campaign is in line with my journey as a dad lately — examining what in life is worth saving. Like the things we treasure as parents, the AAE’s goal is to remind us that our natural teeth are also worth saving.

To answer my own question, endodontists are dental specialists that perform root canals. Another thing I learned is that today’s root canals are not painful like the stereotype would suggest, and they’ve come a long way from previous generations. Most patients now experience no more discomfort than from getting a filling.

Visit aae.org/worthsaving to learn more and findmyendodontist.com to locate a specialist that can help keep you smiling and healthy for a lifetime of happy memories.

As a brand ambassador for AAE, I am being compensated for writing this post. However, all opinions are my own.