What is Conversion Therapy?

Conversion therapy, also known as reparative therapy, ex-gay therapy, or sexual orientation change efforts, has its roots in pre-Freudian torture of gays and lesbians. Lobotomies, castration, and institutionalization were common treatments for the “mental disorder” of homosexuality. In the 50s and 60s, methods were only slightly less extreme, utilizing electric shock treatments, aversion techniques (nausea-inducing drugs given simultaneously with images that incited same-sex attraction), and masturbatory reconditioning.

Not surprisingly, churches and religious groups were drawn to the idea that gay people could be “cured,” and adapted conversion therapy to include counseling, threats of excommunication, and exorcism. Today (yes, it’s still around), conversion therapy typically comes from three sources: licensed therapists, churches, or independent religious organizations.

My Experience with Conversion Therapy

Beginning at 18, I was involved in some form of conversion therapy for nearly a decade. Growing up the son and grandson of Baptist ministers, when I had a problem, the first solution was always God. I still remember calling the Baylor campus health center, trembling as I asked if they had counselors to help me be straight. I “came out” to my parents soon after, assuring them I could be cured if they paid for the therapy. They were just as ill-prepared to deal with my “condition,” and eagerly offered their support.

I spent several months with a Christian psychologist, praying and meditating and rummaging through my memories, searching for the defining trauma that caused me to deviate from God’s plan. The therapist trained me to recondition myself to be more masculine: in the way I dressed (less colorful, more buttoned up), the way I talked (less emotional, more rational), the way I interacted with other males (handshakes, not hugs).

Later my freshman year, I joined a church that believed God could cure anything, including me being gay. Fasting, accountability, public confession, and exorcisms were a regular part of my college experience. For two summers between college, I joined an “ex-gay” group. A religious support group that met weekly and consisted of separate group houses for men and women struggling with their sexuality.

I continued to be heavily involved in my church after college, gaining responsibilities and leadership positions. I led Bible study groups, mentored college students, and went on multiple mission trips abroad. Yet as time went on, the pastor saw that my efforts to be straight were failing. My pastor gave me an ultimatum — three strikes and I’m out. I inevitably faltered and was made to confess before the church. I was stripped of all my responsibilities and sent to yet another therapist.

Through this humiliating and devastating process, I lost nearly all my friends. They either pitied (though promised to pray for me) or cut me off completely. The new therapist employed much of the same practices as the earlier one. The difference this time was that I felt hopeless from years of failure, felt terrible alone, and was beginning to question everything I’d believed up to that point. That last part, while terrifying, was exactly what I needed. 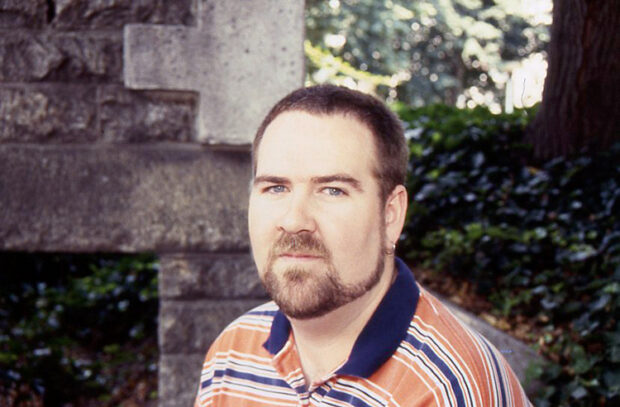 Me in 1997, from a Washington Blade cover story about conversion therapy.

Luckily, my story has a happy ending. I moved to DC where I quickly befriended several queer people, empowering me to come out of the closet. Not long after, I became an advocate against conversion therapy, speaking at the National Press Club, debating “ex-gay” supporters, protesting in front of the Family Research Council. The Washington Blade (DC’s LGBTQ newspaper) even featured me in a front-page interview. My husband and I have been together nearly 25 years, we are raising a wonderful son, and I’m surrounded by loving and supportive friends and family. I’ve now lived longer out of the closet than I lived in it and am indeed a “happy homosexual.” 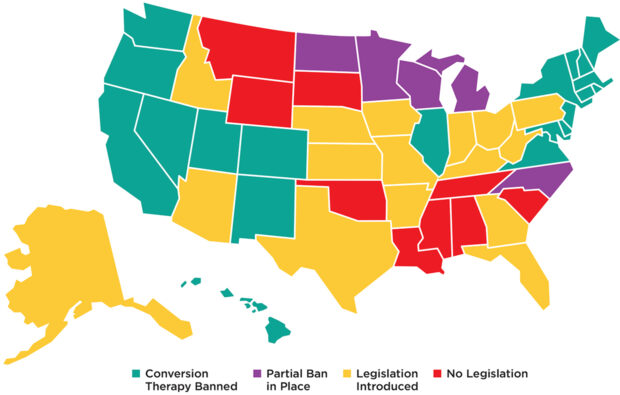 While this is great news, these bans have limited power. The laws only prohibit licensed therapists from practicing conversion therapy, and the bans apply only to treating minors. Meaning, churches and religious groups can and still promote these harmful ideas (to both children and adults) as the laws can’t dictate what churches teach. It also means conversion therapists can still treat their adult patients without consequence. And as with many progressive laws in recent months, these are in danger of being overturned.

Sam Brinton (a friend and fellow chorus member) has had extensive experience as an advocate for LGTBQ youth. They founded the 50 Bills 50 States campaign which helped pass more than 20 statewide protections against conversion therapy across the country. Sam weighs in on the current state of conversion therapy legislation:

“We have seen a significant slowdown from the heydays of just a few years ago when we passed a law protecting LGBTQ youth from conversion therapy every other month it seemed. As state legislatures across the country attack trans and nonbinary youth with hateful legislation invalidating their identities, now more than ever is the time we need protections from conversion therapy in every state.”

Conversion Therapy by the Numbers

The statistics* below show the efficacy of conversion therapy bans, while also demonstrating the harm it causes LGBTQ people, particularly queer youth.

How You Can Help

Whether you or a loved one have been through similar experiences or you’re just learning about conversion therapy, your support and advocacy are crucial to continuing the push for legislation and educating those around you. Here are just a few things you can do.

Dear therapists: I don’t want to diminish the value of legitimate therapy by using the term “conversion therapy” — they are not one and the same. I am a strong proponent of attending to one’s mental health and have been seeing a wonderful therapist for many years. And he’s not once asked me to put on a tie.

*Statistics are from The Trevor Project’s 2022 National Survey on LGBTQ Youth Mental Health.